If you could pick just one car manufacturer that has consistently produced some of the best hot hatches in recent decades, it would have to be Renault. Sure, the likes of VW, Honda, and Ford, among others, have all produced some epic hot hatches in recent times, but it’s impossible to look at the lineage of epic Clio and Megane R.S. models and not applaud what the French carmaker has done.

Fast forward to the present day and sizzling compact hatches remain as appealing as ever and the newest to land on Australian shores is the 2020 Renault Megane R.S. 300 Trophy. Is it as good as we’ve come to expect from Renault Sport? Let’s find out.

A rare and exotic species

The Megane R.S. 300 Trophy sits at the top of the range (excluding the Trophy-R) above the lesser R.S. Sport and R.S. Cup models. Only 100 units are bound for Aussie shores.

Read Also: I Drove A 2020 Toyota GR Supra GTS For A Week, Here’s What I Think About It

Like all other variants in the Megane family, the Trophy is powered by a 1.8-liter turbocharged four-cylinder engine but while the the R.S. Sport and R.S. Cup models make do with 275 hp (205 kW) at 6,000 rpm and 288 lb-ft (390 Nm) of torque, but the Trophy has a little more punch. More specifically, it is good for 296 hp (221 kW) and 310 lb-ft (420 Nm) with the available dual-clutch transmission. While the EDC will likely be the gearbox of choice for most customers, Renault Sport has appeased hardcore driving enthusiasts with an available six-speed manual. Given a choice between testing the EDC and the six-speed, we went for the latter, where torque is capped at 295 lb-ft (400 Nm).

The Trophy enjoys some other changes from the Cup, including shorter gearing a new exhaust, lithium battery, and a ceramic turbocharger wheel. 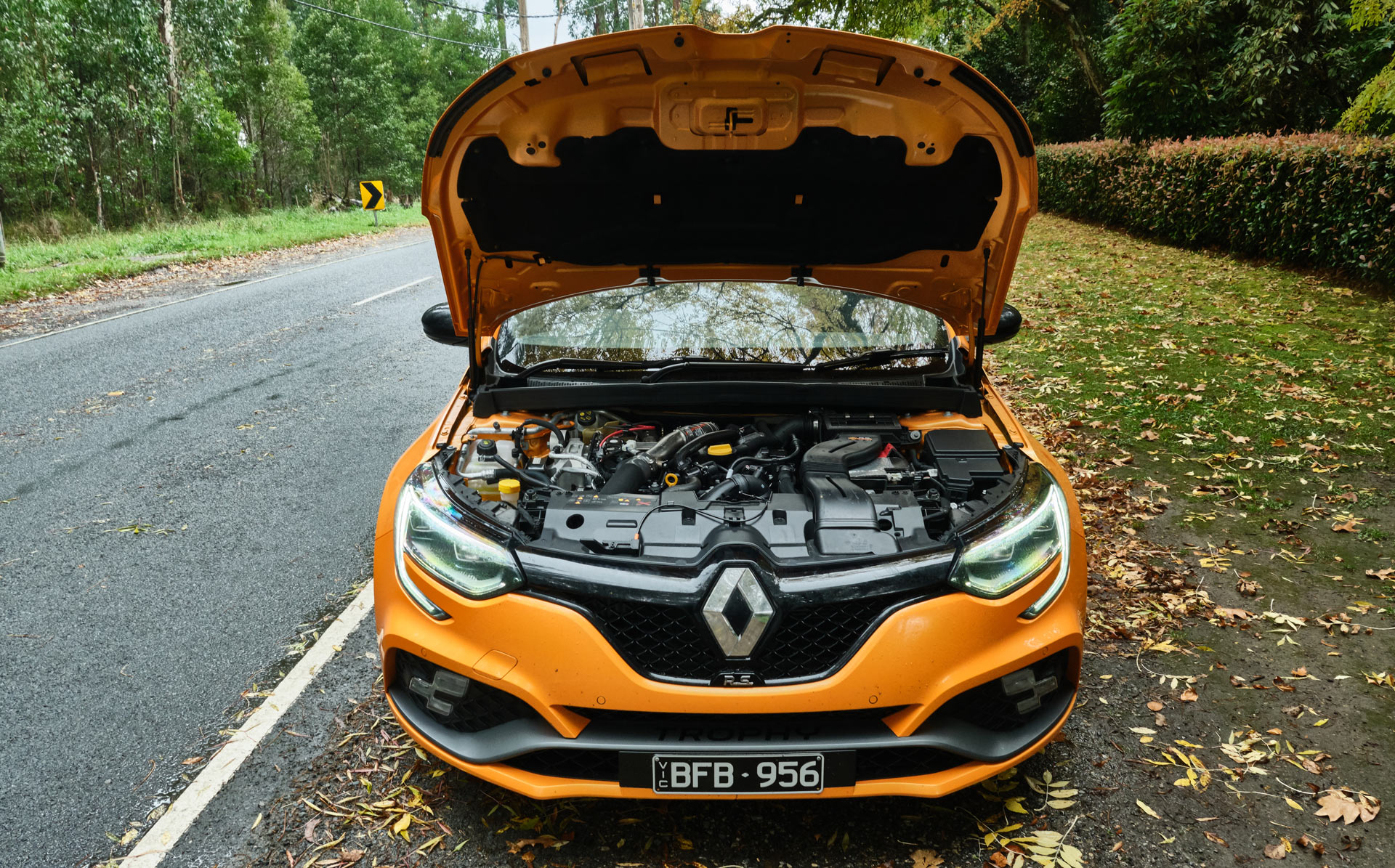 An engine that gets your blood pumping.

Slide into the comfortable and supportive Alcantara-clad seats, push down the brake, press the Start/Stop button, and the 1.8-liter fires into life. This is no ordinary small-capacity four-cylinder either as starting it up is like waking a demon. It burbles and shouts into life and begs for you to get rolling.

Setting off for the first time, I immediately felt at home in the cabin. Like lesser Megane R.S. models, there is a girthy three-spoke Alcantara and leather-trimmed steering wheel as well as a beefy shift knob and shifting mechanism. All three pedals are very well placed.

Five different driving modes are offered; Comfort, Neutral, Sport, Race, and Perso, the latter of which lets you customize various settings to your own taste. Keen drivers will probably never use the Comfort and Neutral settings and for the week of the car, I almost exclusively drove it in Perso with all settings dialed into their ‘Race’ settings and the ESC in ‘Sport’ mode. Drive the car in ‘Race’ and the ESC is disabled, resulting in quite a lot of wheelspin off the line and through corners if you’re a little too aggressive with the accelerator. 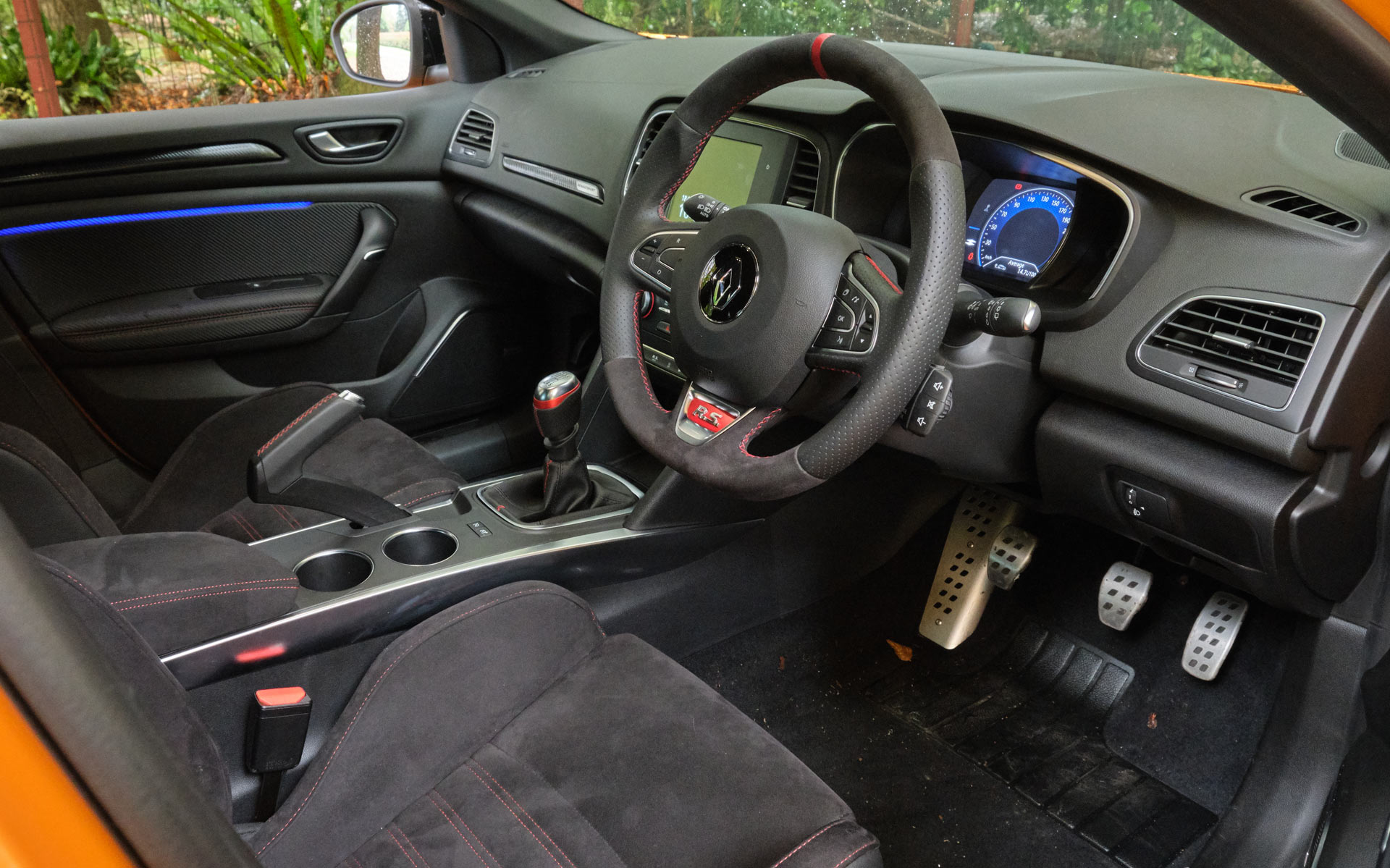 In a straight-line, the Megane R.S. 300 Trophy is no slouch. Despite all of its power being sent to the front wheels, it can hit 62 mph (100 km/h) in 5.7 seconds, on par with the Honda Civic Type R. However, it’s not off-the-line acceleration that makes this engine addictive.

Once you get the 1.8-liter ticking over about 2,000 rpm, it comes into its own with a burst of linear and predictable power all the way up to the redline approaching 6,500 rpm. Not all turbocharged four-cylinder engines like to be revved, but this one absolutely loves it, encouraging you to pin the throttle, hit the redline, change up a gear, pin the throttle once again and barrel down the road. Torque steer is relatively minimal on smooth roads but if things get a little bumpy, the steering wheel will pull you from one side of your lane to the other.

Renault’s engineers have developed an exhaust system that crackles and pops like the very best of them. Tap the throttle at the right moment (e.g. when in 3rd gear at 60 km/h – 37 mph) or 4th gear at 80 km/h – 50 mph), and the exhaust sounds like a machine gun, firing shots off into the distance. It’s addictive. And that’s only in the ‘Soft’ exhaust mode. Turn it up to ‘Race’ and the sounds are heightened further. Even when cruising at a consistent speed, I often found myself tapping away at the throttle just to get these pops and bangs happening. 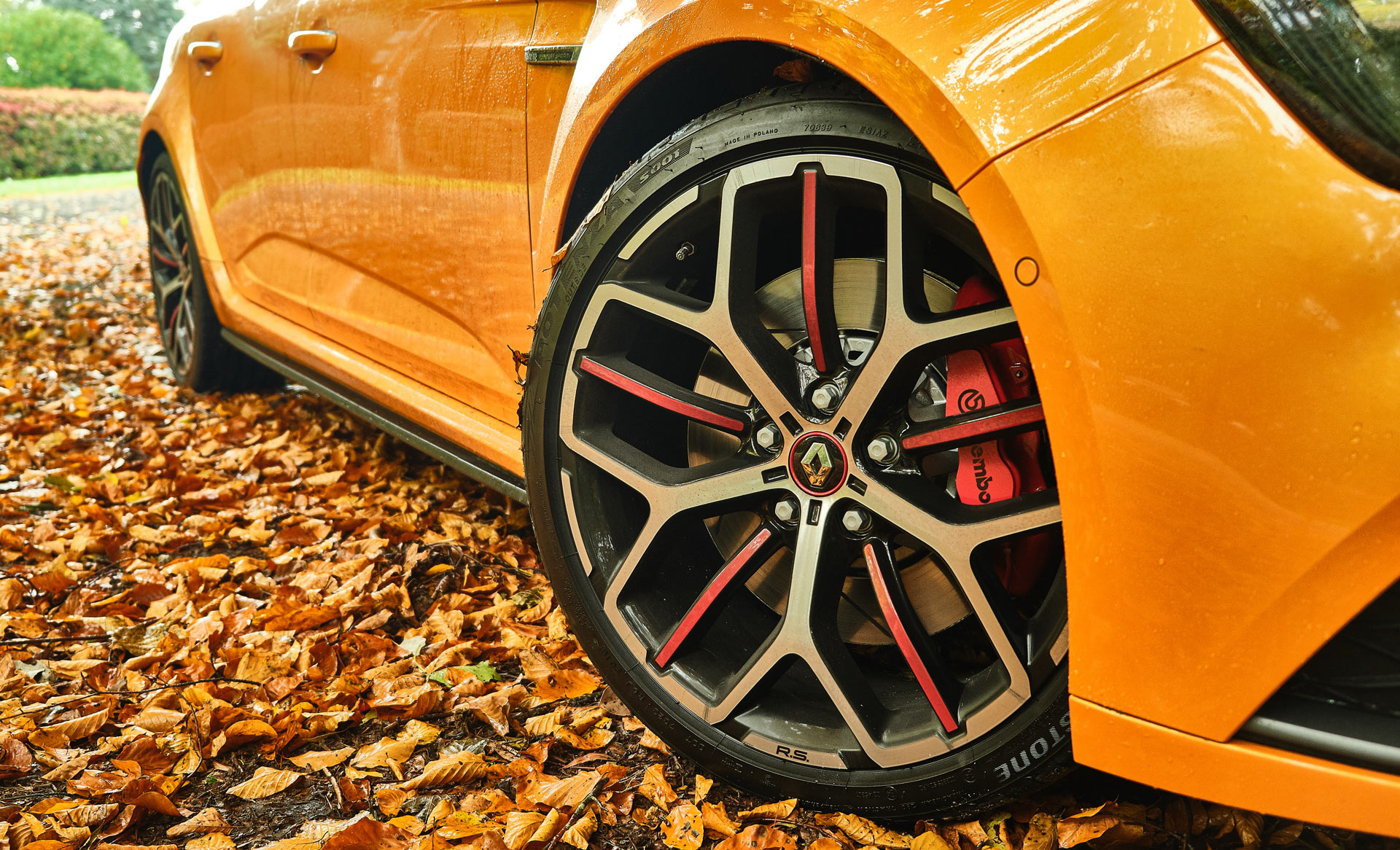 Cornering abilities that will shock

Of course, most people don’t buy front-wheel drive hot hatches for their straight-line speed and exhaust notes. It’s in the corners where cars like these really come into their own and it’s no different with the R.S. 300 Trophy.

The car comes equipped with Renault’s ‘4control’ rear-wheel steering system. In any mode other than ‘Race’ or ‘Perso’, this system turns the rear wheels slightly in the opposite direction to the front wheels under 60 km/h (37 mph). In ‘Race’ and ‘Perso’, the system works at up to 100 km/h (62 mph). Beyond that mark, the rear wheels turn in the same direction as the front.

Also Read: How Does Toyota’s 86 Stand Now That The Supra’s Here? Well, It’s Still Fun, But…

The results of this system are profound when the car is driven hard. Turn the steering wheel even slightly into a corner and the car darts into the bend with fury and in a way that beggars belief. Mid-corner grip is superb thanks to the mechanical limited-slip differential and the Bridgestone S001 tires, allowing you to keep the throttle pinned to the floor through sweeping bends. Compared to the two most recent hot hatches I drove, the Hyundai i30 N and Mk 7.5 VW Golf R, the R.S. 300 Trophy feels noticeable quicker through the corners. Quite often, it is the rear-end that loses grip before the front, triggering some lovely oversteer.

Not everything is perfect

Then we come to the suspension system which, when compared to the electronically-adjustable dampers of the i30 N, feels incredibly stiff. On one hand, this makes the Megane feel much more focused and hardcore than some of its rivals and allows you to feel every small bump and camber in the road. It is perfectly good for everyday driving. However, during our week with the car, we took it along some bumpy country roads and found it to be a little too uncompromising, as the car can dart across the road and skip over bumps, throwing you up and down in the cabin.

Review: 2019 Hyundai i30 Fastback N Improves On A Winning Recipe

How about the steering and the brakes? The steering is nicely weighted in ‘Race’ mode and gets lighter in Neutral and Comfort modes. Unfortunately, you cannot adjust the weight of the steering with the powertrain in Race and can only enjoy the lighter (and better) steering weight in the lesser driving modes. Braking is also hugely impressive, thanks in no small part to the four-piston Brembo calipers at the front.

Shifting is a bit of a mixed bag. As mentioned above, the pedals are perfectly positioned to allow for heel and toe shifting but the action of the shifter feels a little numb and rubberized. Still, we’d pick the manual over the dual-clutch any day of the week, but perhaps we’re just old fashioned like that. 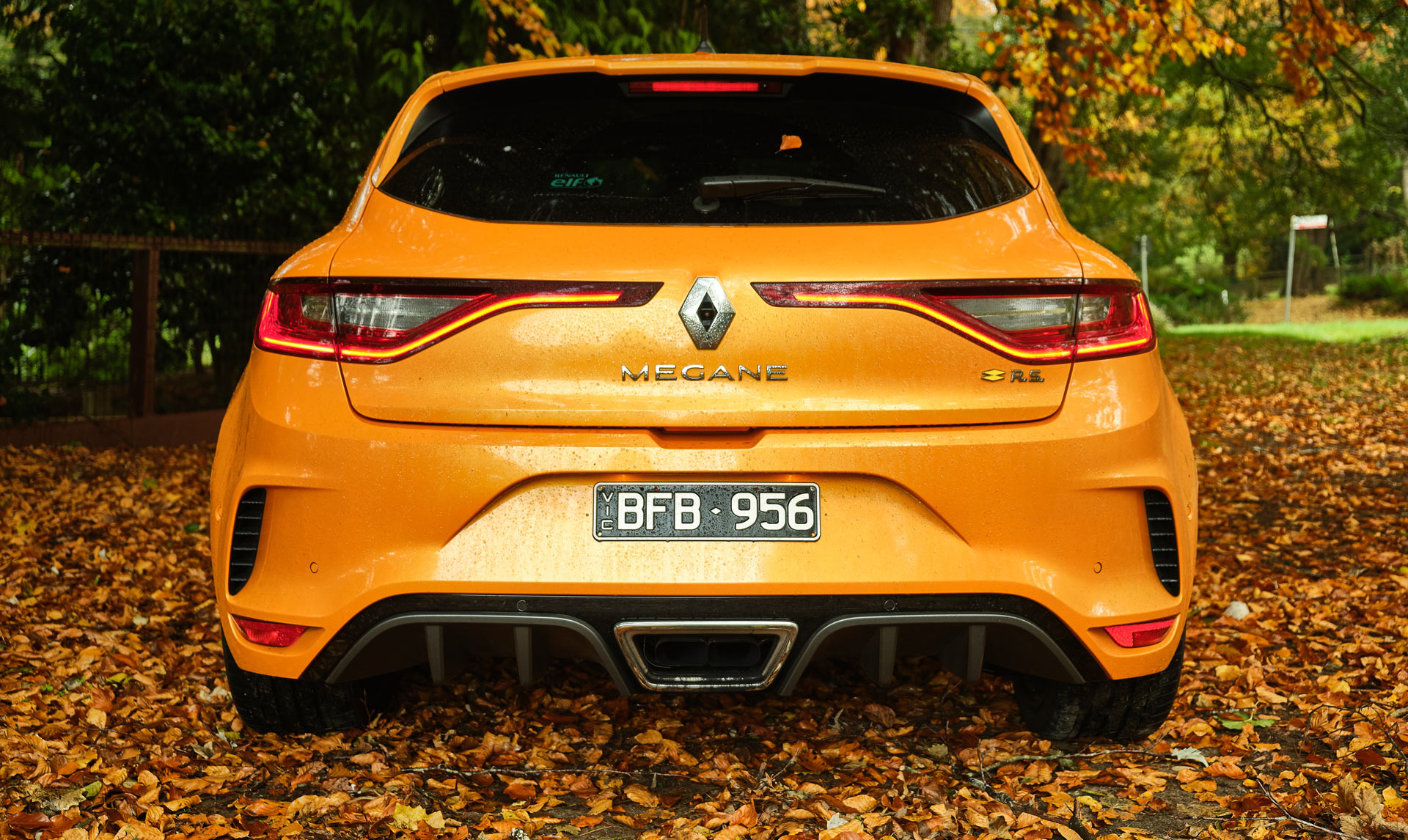 An interior fitting of the price

The cabin of the Trophy is a lovely place to sit and feels much more premium than the i30 N (fitting given the price difference). In addition to the Alcantara seats (Australia sadly doesn’t get the Recaro seats of overseas markets), there is a healthy dose of carbon fiber trim and even configurable accent lighting. Other nice touches include heated seats and an excellent Bose audio system. Renault’s familiar 8.7-inch R-Link infotainment is featured with Apple CarPlay and Android Auto. While it does the job, it’s far from the best on the market. The configurable 7.0-inch digital gauge cluster adds to the premium and sporty feel. On a personal note, I wasn’t a huge fan of the steering wheel, finding it a little too chunky but that’s only a small gripe. 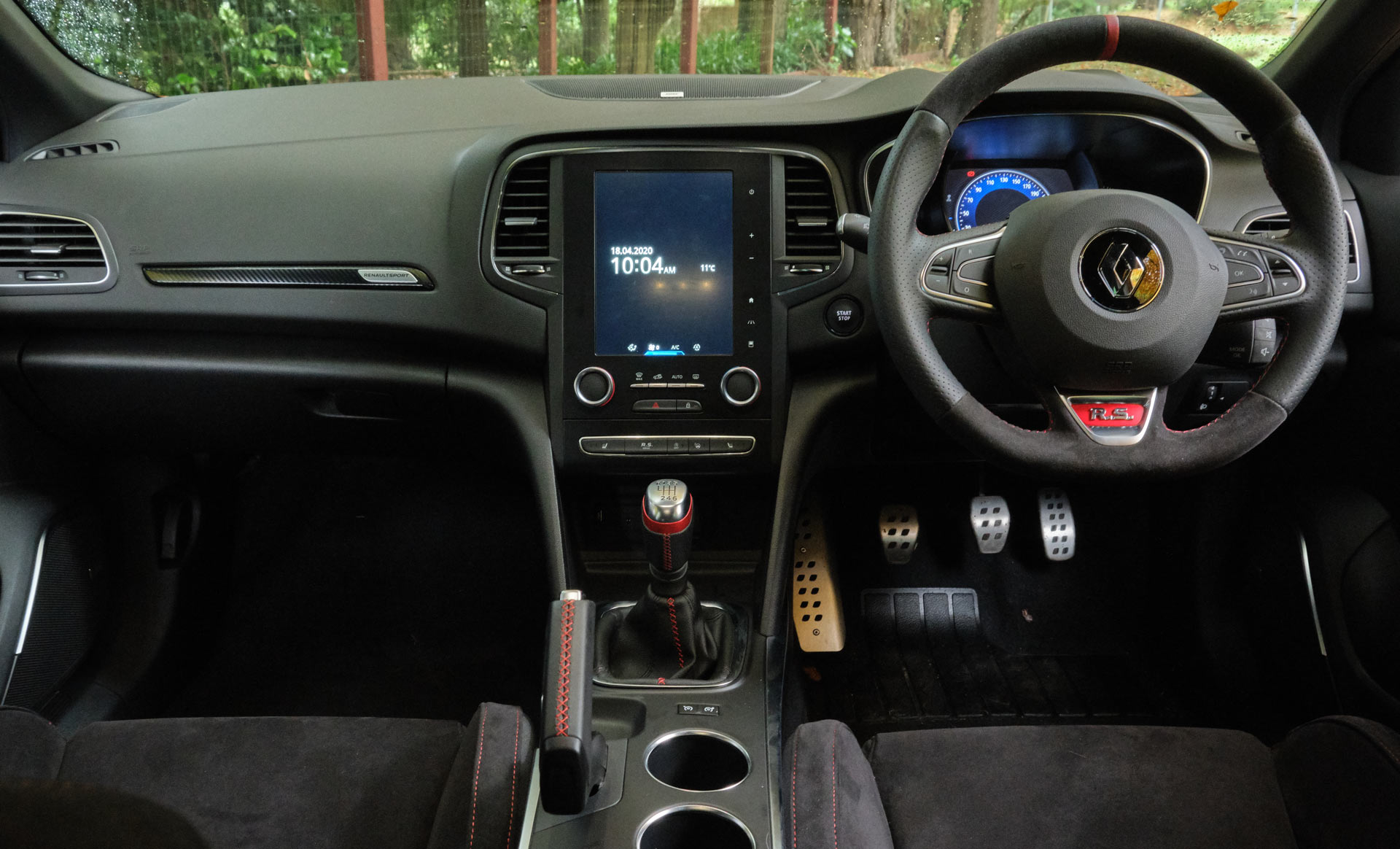 Space inside the cabin is also very good. I could fit into the rear seats with my hair only just brushing the headliner and had plenty of leg and toe room. There’s also a decent amount of space in the trunk, 434 liters (15.3 cubic feet) to be precise.

Our test car was finished in Tonic Orange, an AU$1,000 (US$646) option and arguably the best color offered for the hatch. This thing has a lot of presence on the road and turns heads, thanks not only to the paint but its hunkered down and wide stance. It’s a serious, serious car with a serious price tag, AU$54,990 (US$35,545) as tested, putting it a few thousand above the Honda Civic Type R. 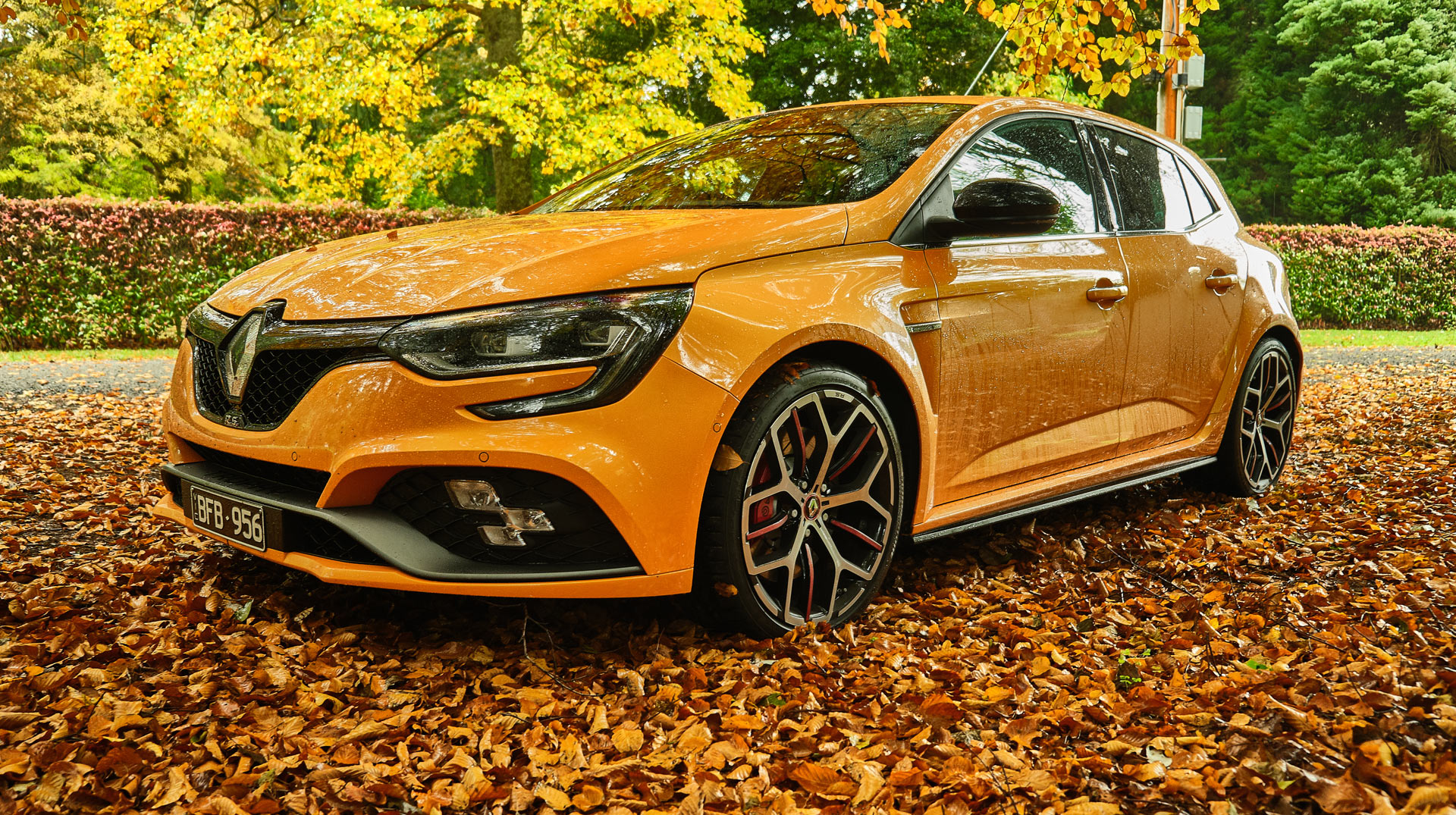 Few cars at this price offer as many smiles per mile

There’s no question that this new Renault Megane R.S. 300 Trophy is a fitting new model that lives up to the hype of its predecessors. From point A to point B on a twisty road, you’ll be hard-pressed to find all that many cars which are faster, especially for this price.

It can be a little uncompromising around town but drivers are rewarded when they start exploring the performance.

Is it a class leader? We’ll be able to answer that when we review the 2020 Honda Civic Type R in a couple of months…