Driven: 2020 Mercedes GLE 450 4MATIC Is A Cure For Your Bentayga Blues

If you line up every single midsize premium SUV in the market and pick one randonly, you will surely end up with a family hauler that’s comfortable, full of impressive onboard tech, quick and extremely safe.

So deciding between something like the all-new 2020 Mercedes GLE and its rivals will ultimately come down to personal preference, pricing and brand loyalty. Technically though, this is not an easy choice, not to mention aesthetically, where opinions tend to differ.

However, if your ideal SUV is something that’s elegant, supremely comfortable, ultra-safe, quick and also identifies as a hybrid, the Mercedes GLE might just tick all those boxes better than anything short of a Bentley Bentayga.

Do I want the new GLE?

Even before picking up my 2020 GLE 450 test car, I had extremely high expectations. For starters, I’ve reviewed every single generation of the GLE, beginning with the 2nd-gen M-Class, and this is one nameplate that’s always performed admirably as far as overall comfort and amenities are concerned.

Also read: How Does The New 2019 Mercedes GLE Compare To Its Predecessor?

Still, the first thing I noticed was the styling, which in this case was boosted by the AMG package (a $3,250 option). It gives the GLE so much more road presence that it would be almost a shame not to opt for it since you’re already giving Mercedes $50-60,000 of your own hard-earned ones (more on pricing later).

The overall design language, dubbed ‘Sensual Purity’ by Mercedes, suits a larger vehicle like the GLE surprisingly well. This is an imposing SUV to look at and, as far as I could tell, it doesn’t have any bad angles, although you might want to consider nothing but 20-inch or larger wheels in order to not mess up its visuals (this one had 21-inch ones). Also, since the styling of the Audi Q7 isn’t exactly new and the BMW X5 has split opinions with its new design language, one could easily argue in favor of the GLE as being the most handsome German SUV out there, apart probably from the Porsche Cayenne, which features a sportier aesthetic.

If you’ve been in an E-Class recently, then you’ll pretty much know what to expect as far as interior quality is concerned. I would say that the new GLE’s cabin is slightly better built than that of an E-Class, but not by much. The overall feel is solid. Everything you touch feels as it should in a car this expensive, and if you like Mercedes’ dual-screen dashboard layout with 12.3-inch screens, then you’ll probably enjoy your time onboard the new GLE.

I really appreciated the driving position, which was great, much like the head and knee room for rear seat passengers. I’m 5’11 (roughly 1.80 m) and you can see in the gallery just how much knee room there was behind the driver’s seat – nearly a forearm’s length. As for trunk volume, you get a massive 29.1 cu.ft (825 liters) without even folding the seats (our test car was the 5 and not the 7-seat version). 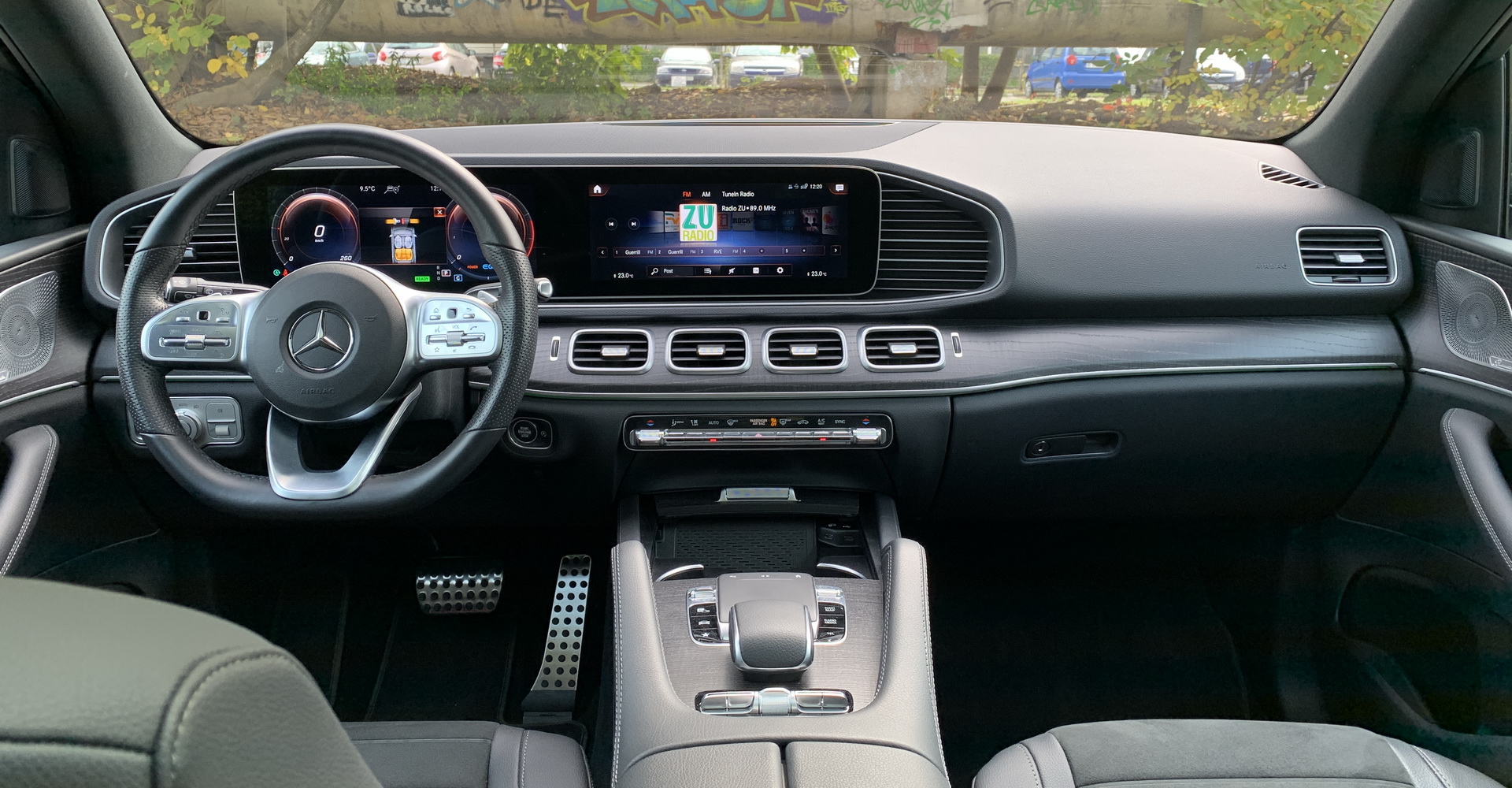 Now let’s run through some of the options on this spec, which included the Premium Plus Package (Panoramic roof, Burmester sound system, heated front seats, wireless phone charging, Multibeam LED headlights), heated rear seats, heated windshield, the AIRMATIC suspension, Distronic Plus with Steering Assist and loads more. With all of its options and taxes included, this was a €95,997 ($106,000) car here in Romania, and that’s without two of its best characteristics.

Our test car was actually missing the E-ACTIVE Body Control Package (an $8,100 option in the U.S.), as well as the MBUX Technology Package, which adds Augmented Video for the sat-nav and a head-up display. These are arguably the two coolest features on the new GLE and it’s a shame we couldn’t sample them.

Other features that might have made living with the GLE even more blissful would have been the optional Soft-close doors, the massage seats and the $5,400 Burmester High-End 3D Surround Sound system. Our test car only had the “entry-level” Burmester system, which was very good, but not great – audiophiles will surely understand the difference.

No, but trust me when I say that you want it. The latter has a 2.0-liter turbocharged four, whereas the GLE 450 4MATIC is powered by a 3.0-liter inline-6 turbo with EQ Boost. It’s a mild-hybrid system that allows you to register the car as a hybrid, while also taking some of the load off the internal combustion engine. 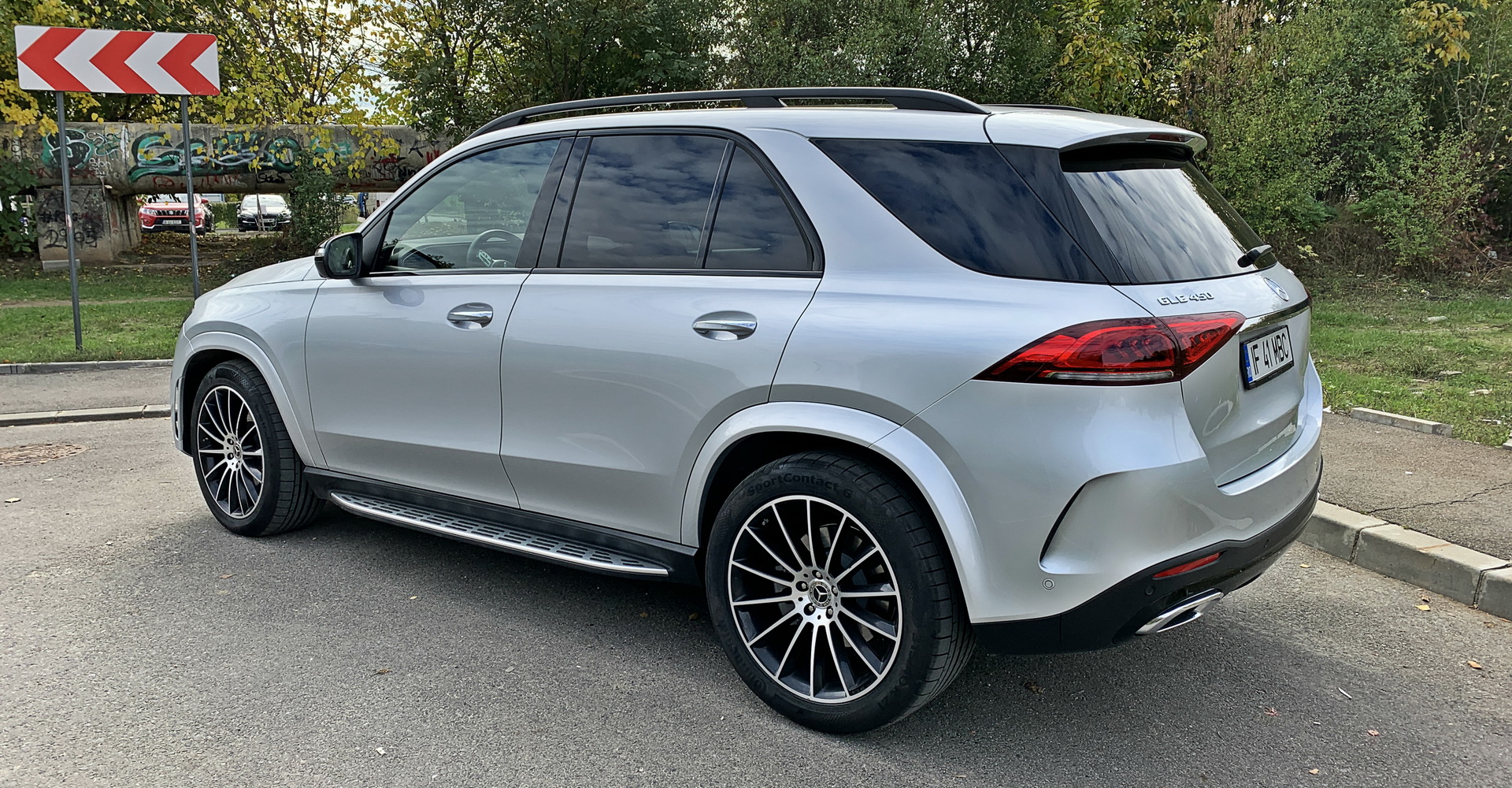 To help you understand just how good this powertrain really is, I can tell you that even though on paper the GLE 450 has considerably less power than say a first-generation Porsche Cayenne Turbo with its 450 HP turbocharged V8 engine, the two will hit 60 mph in exactly the same amount of time.

As for the handling, the AIRMATIC suspension is clearly a must-have, soaking up bumps and imperfections in true Mercedes-Benz fashion. The GLE is also very quiet and hunkers down really well at high-speed, giving you a strong sense of stability, while also remaining quite poised in the corners for a car this size. Of course, this is where some people might argue that steering feel and cornering is not quite on the same level as in a BMW X5, but if you put the car in Dynamic mode, it definitely enters that same ballpark – only the Cayenne is noticeably sharper.

So, what’s the verdict

The latest GLE is nearly a 10/10 effort from Mercedes, and I don’t say this lightly. It’s also easy to see why somebody would rather have this over its Audi and BMW rivals. The spec however has to be right, which means the price will definitely rise considerably, but in the end, it’s probably the closest you’re ever going to get to driving a Bentayga without having to spend Bentley-money.