The 2020 Subaru Ascent is a three-row crossover SUV with standard all-wheel drive and standard active safety features. There is nothing remarkable about it. It doesn’t have the rugged good looks of the Kia Telluride, or the high-performance variants of so many “bromobiles,” or the fuel economy of the 2020 Toyota Highlander Hybrid.

It excels, however, at doing what three-row crossovers are meant to do, which is haul families and their gear in comfort and safety.

Safety is the keyword here, and with standard AWD as well as the suite of active safety features Subaru calls EyeSight, the Ascent pulls ahead of the competition from the get-go.

EyeSight is a camera-based system mounted by the rearview mirror, so it more closely approximates human angles of vision than a camera system mounted in a grille. It includes automatic emergency braking, lane-departure warning, active lane control, adaptive cruise control, and a rear-seat reminder. Those can be expensive add-ons from other automakers, specifically, Chevy. The top Limited model I tested also had blind-spot monitors, rear cross-traffic alert, and reverse automatic braking.

It could be a lot going on, but all the dings and zings of the things are projected in the head-up display when they’re triggered, so you don’t need to look around for a clue. The status of the safety functions is also displayed in the monitor wedged deep in the dash near the windshield. It’s Subaru’s way of distinguishing vehicle info from the navigation, media, and phone functions in the 8.0-inch touchscreen.

The adaptive cruise control benefits the most from the cameras’ high perch in the windshield. It is exceptionally smooth, without any abruptness when the lead car slows or a car changes lanes into its path. It doesn’t smash the gas, either, when the lane clears, so napping passengers will never wake in alarm at you blaming the computer’s erratic driving.

Active lane control is less successful. On two-lane divided highways where you’d use it most, it works well once it drunkenly leans from lane edge to edge to find its center. On single-lane roads with double yellow lines, it leans more to the oncoming side of the road, which isn’t comforting. It only provides about 15 seconds of hands-free driving at best, so I ended up turning off active lane control.

Subaru’s symmetrical all-wheel-drive system, along with its turbocharged 2.4-liter flat-4 that maintains a low center of gravity, conspire to keep the tires on the 20-inch aluminum-alloy wheels on the ground (18 inchers are standard). Active torque vectoring sends the torque away from the slipping wheel to the wheel or wheels with the most grip, and the four-wheel independent suspension keeps the Ascent soft while cruising around town or on the highway. 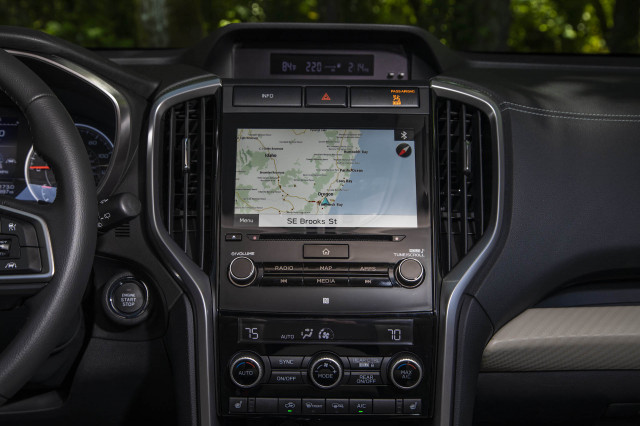 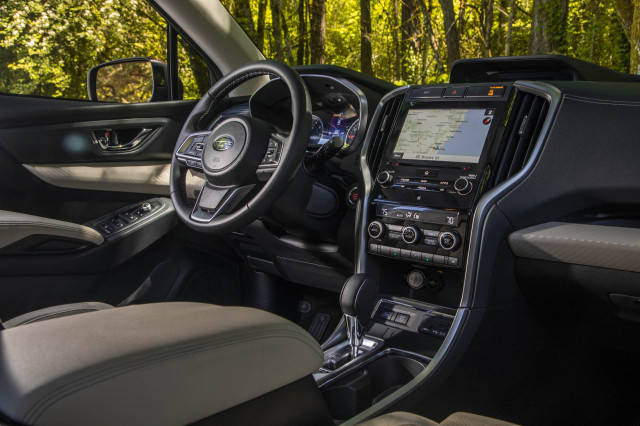 Off the paven path, the Ascent and its 8.7 inches of ground clearance handles off-road terrain in a manner befitting Subaru. The X-mode button will make the brake torque vectoring more sensitive and reactive up and down hill, but it also applies to slippery conditions on pavement. High approach and departure angles enable getting over ruts and fording washed out roads. With seven passengers in the Ascent, we climbed up and down a Colorado mining road in the foothills of the Rockies. It was not a rugged off-road trail, but it was a rutted dirt path pocked with the kind of potholes that would kill a car in cities. The Ascent shrugged it off, proving that it has more off-road chops than some of those crossover SUVs that just look the part. Excellent outward vision means that climbing up or down a hill doesn’t come with climbing in and out of the Ascent to check angles.

When the Ascent was launched for 2019 with only a 260-horsepower 2.4-liter turbo-4, there were grumblings that it wasn’t enough power for a three-row crossover. Even laden with seven passengers, with the youngest being a sturdy 12-year old, the Ascent never dawdled or groaned under heavy load. The continuously variable automatic transmission (CVT) finds the right gearing to deliver 277 pound-feet of torque from 2,000 to 4,800 rpm. There is plenty of power to get up and down the Rockies fully laden, and Subaru says it can tow 5,000 pounds same as the Toyota Highlander, Honda Pilot and other three-row crossovers.

Those seven passengers suffered neither for power nor for access to the seats. The tester swapped a second-row bench seat for captain’s chairs with small handles on the seat backs so third-row passengers can better get in and out. A sliding mechanism on the side of the second-row chairs pushes the seat back forward and slides it up. Latches on the bottom collapse the seats for a full flat cargo floor. 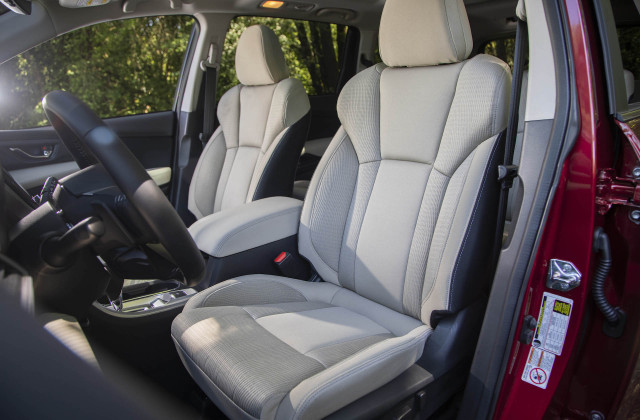 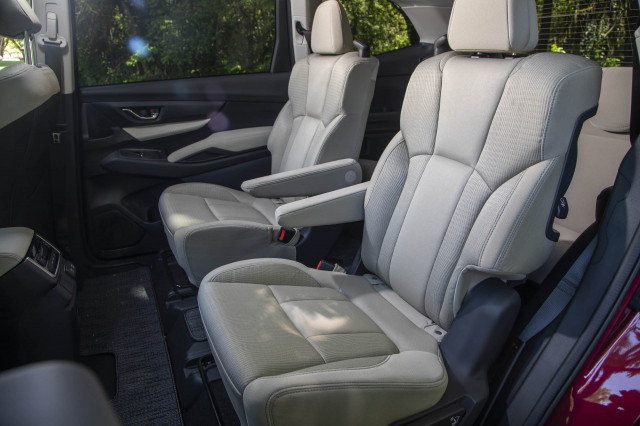 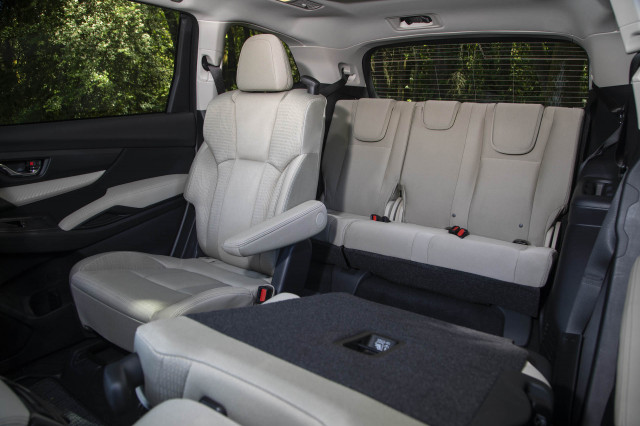 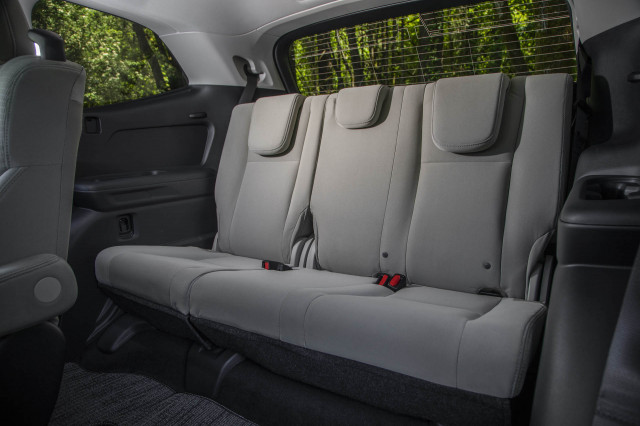 From the power rear gate, the rear seats aren’t as convenient. It takes a pull strap in the seat to lower the third row, which is durable, but the headrests don’t collapse, which is tedious. To get the third row vertical again, you pull the longer strap in the center of the seat. Shorter limbs might have trouble reaching it without mucking up their pants against the bumper. The work around is to tell third-row passengers to lift the seats up their own damn selves.

The third row is over the rear axle, and it can be tight. An adult wedged between two teens prompted some complaints about shoulder and elbow room that was only going to be concluded with a round of Rock ‘Em Sock ‘Em robots. Fortunately, there were cupholders for everyone times three, at 19 total, including two in each front door, and a clever one by the handle of each rear door.

Since Apple CarPlay and Android Auto come standard, I wouldn’t pay for the $2,950 option package that included navigation, panoramic moonroof, and a Harmon Kardon 14-speaker system. The Ascent is best had at or under $40,000.

It holds its own against flashier three-row SUVs, and puts safety first and foremost. That’s a winning formula for the class.

The misses: Active lane control is drunk, a little loud at idle, third seat is a reach to put up from the rear.