2020 Polaris Slingshot Review: Fast And Fun, But Stick To The Manual

If there has ever been a time for fun and frivolous cars, it’s now as countless people want to get outside and enjoy their lives.

Enter the 2020 Polaris Slingshot which is three wheels of mostly pure fun. While the model has been around for years, it recently received an extensive update which promises to increase the fun factor while also broadening its appeal.

Read: We Drove A 2020 Toyota GR Supra GTS For A Week, Here’s What We Think About It

We recently spent two weeks with the Slingshot and it’s certainly interesting to say the least.

The 2020 Slingshot is instantly recognizable, but it features a more aggressive and upscale exterior. One of the biggest changes is the new central LED headlight which looks far more sophisticated than the previous twin projector beam setup. It’s joined new LED daytime running lights and a bulging hood.

Other changes include a newly standard windscreen, revised taillights and an updated rear end. The model also adopts larger wheels as there are 18-inchers up front and a fat 20-incher out back.

While it seems everyone already has an opinion on how the Slingshot looks, we think the updated front end looks pretty good. It’s aggressive and eye-catching, and the stylish fenders really stand out.

Of course, the rear end is where the battle lines are drawn. Three-wheelers are typically love it or hate it affairs, so we’ll just say it’s different.

A More Modern And Car-Like Interior 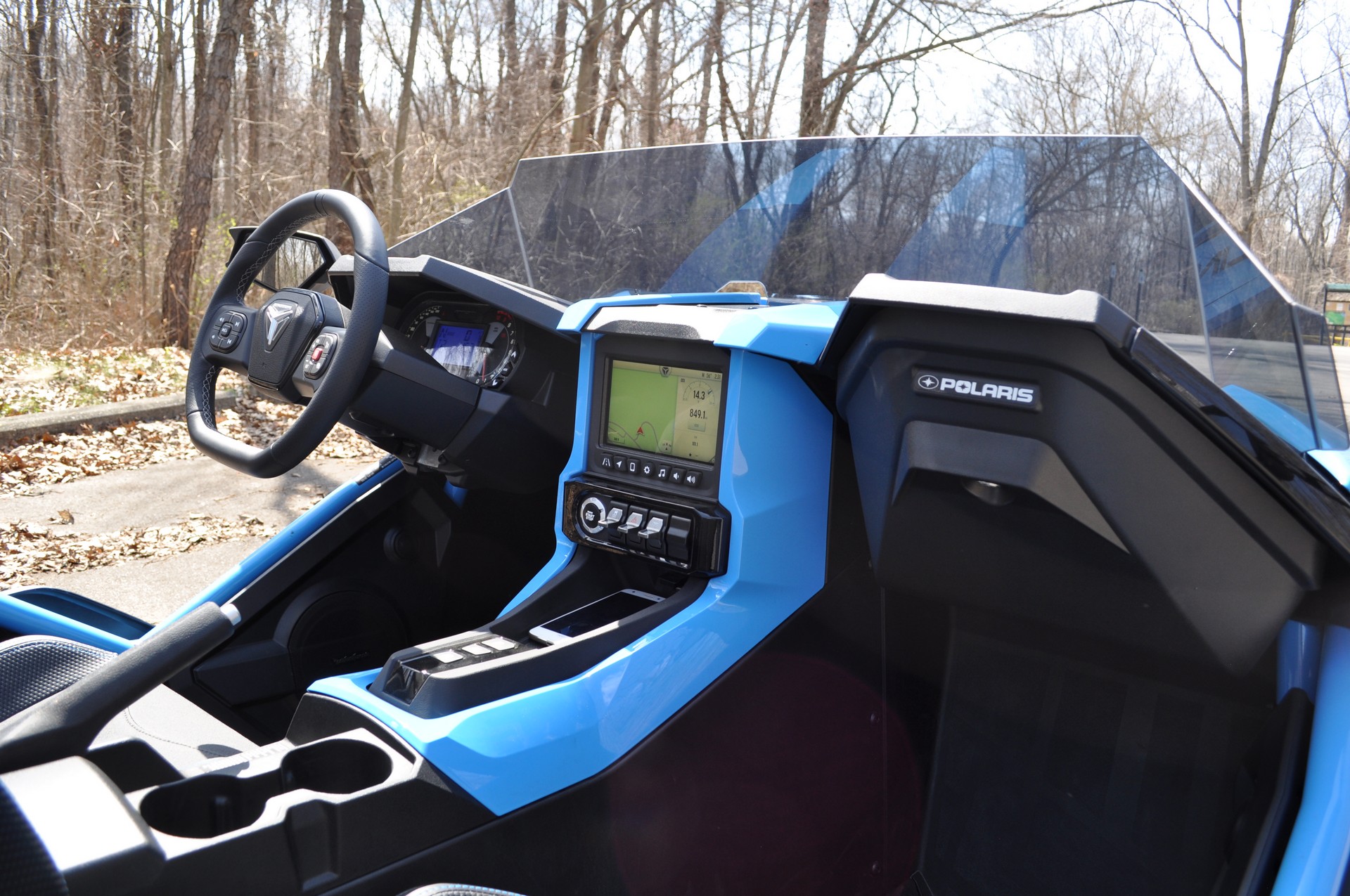 The styling changes continue in the cabin as the 2020 Slingshot has a significantly improved interior with a more modern and car-like design.

Drivers sit behind a new leather-wrapped steering wheel which feels excellent in hand. The flat bottom helps to improve entry and egress, while it also boasts new controls that provide easy access to audio and cruise control settings.

Behind the steering wheel is a new instrument cluster that features analog gauges and an LCD display. The latter is pretty basic, but it’s easy to read at a glance. 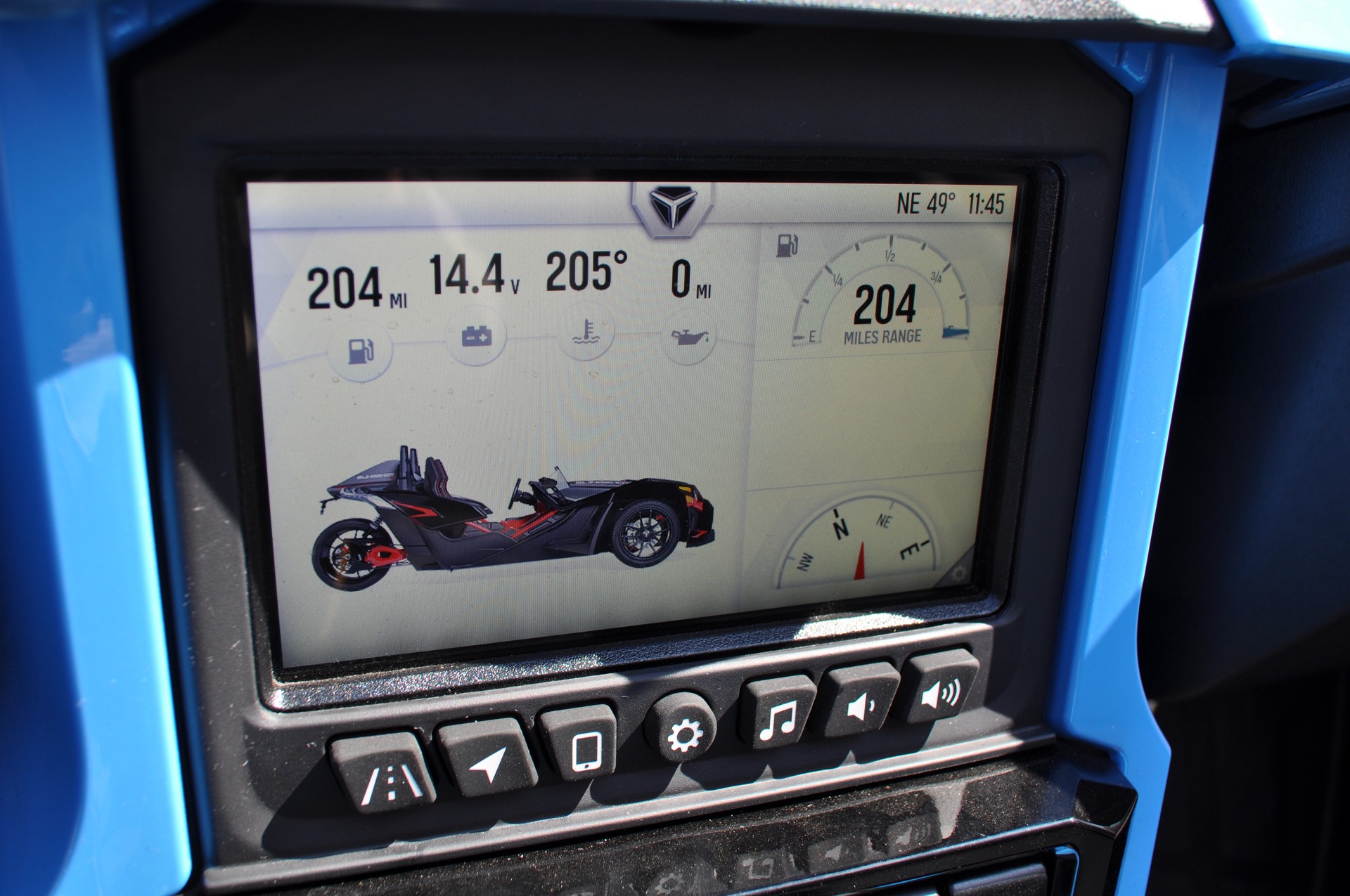 Elsewhere, there’s a revised center stack and an all-new center console. The former is dominated by a 7-inch infotainment system which is fast and well-thought-out. The screen is also bright and we didn’t have any problems seeing it varying lighting conditions.

Further below, there’s new switchgear for the push-button ignition, traction control system and LED interior lights. The model also has a new center console with a convenient cubby that makes for an excellent cellphone holder. The console also boasts larger cup holders and a new padded armrest.

Other highlights include stylish and supportive seats, hidden storage compartments and a 100 watt Rockford Fosgate audio system. The latter has a few downsides as the speakers are mounted in the footwells and this robs a little bit of room on the sides. The system can also be hard to hear clearly while wearing a helmet and traveling on the highway.

An All-New Engine And Gearbox 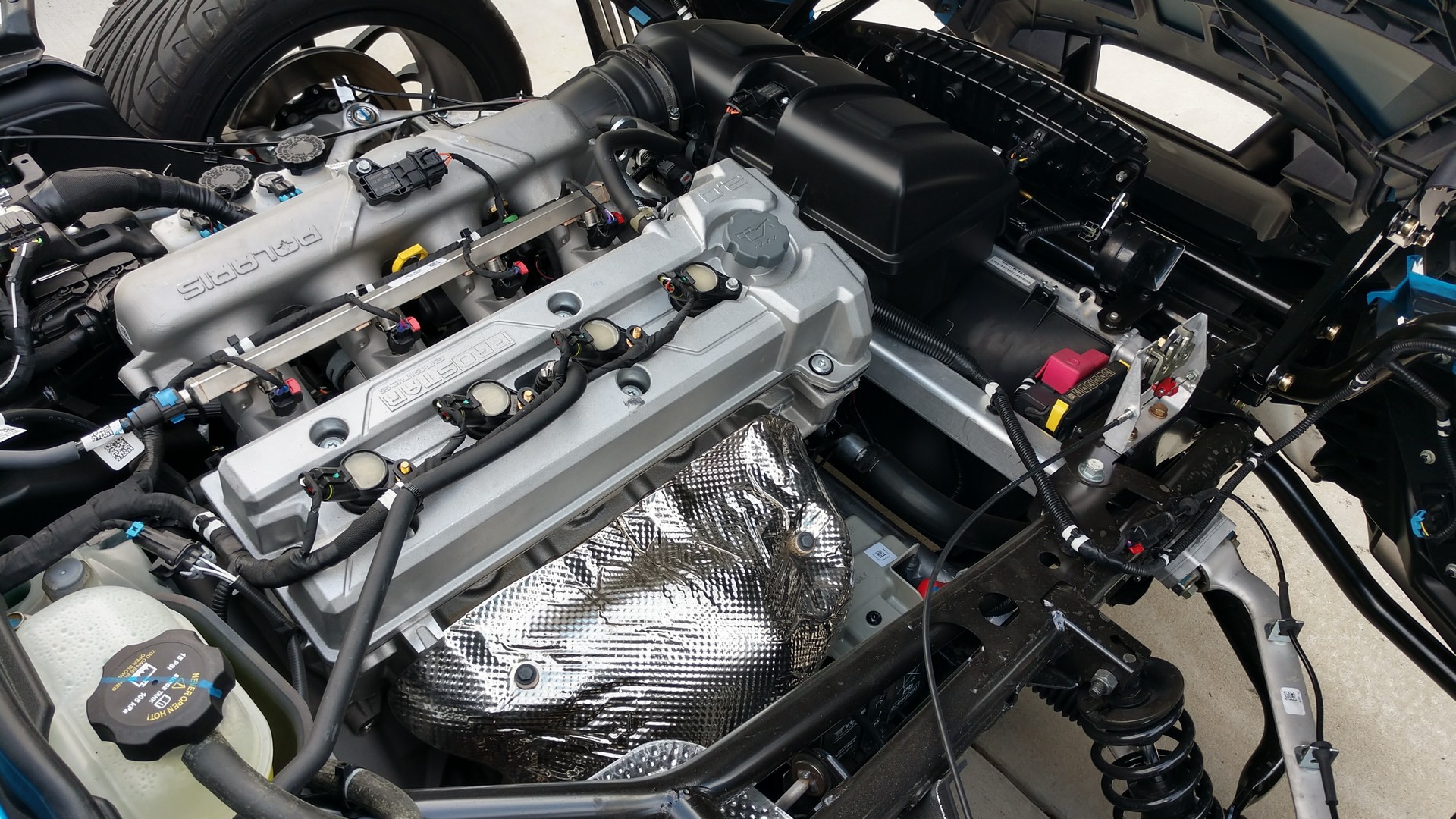 One of the biggest changes for 2020 is the addition of an all-new 2.0-liter ProStar engine. It’s Polaris’ first four-cylinder and it replaces the previous GM-sourced 2.4-liter unit.

While the EPA doesn’t list fuel economy figures for the Slingshot, we got approximately 24 mpg in mixed testing.  However, drivers should expect to see higher numbers as we spent plenty of time idling for photos. 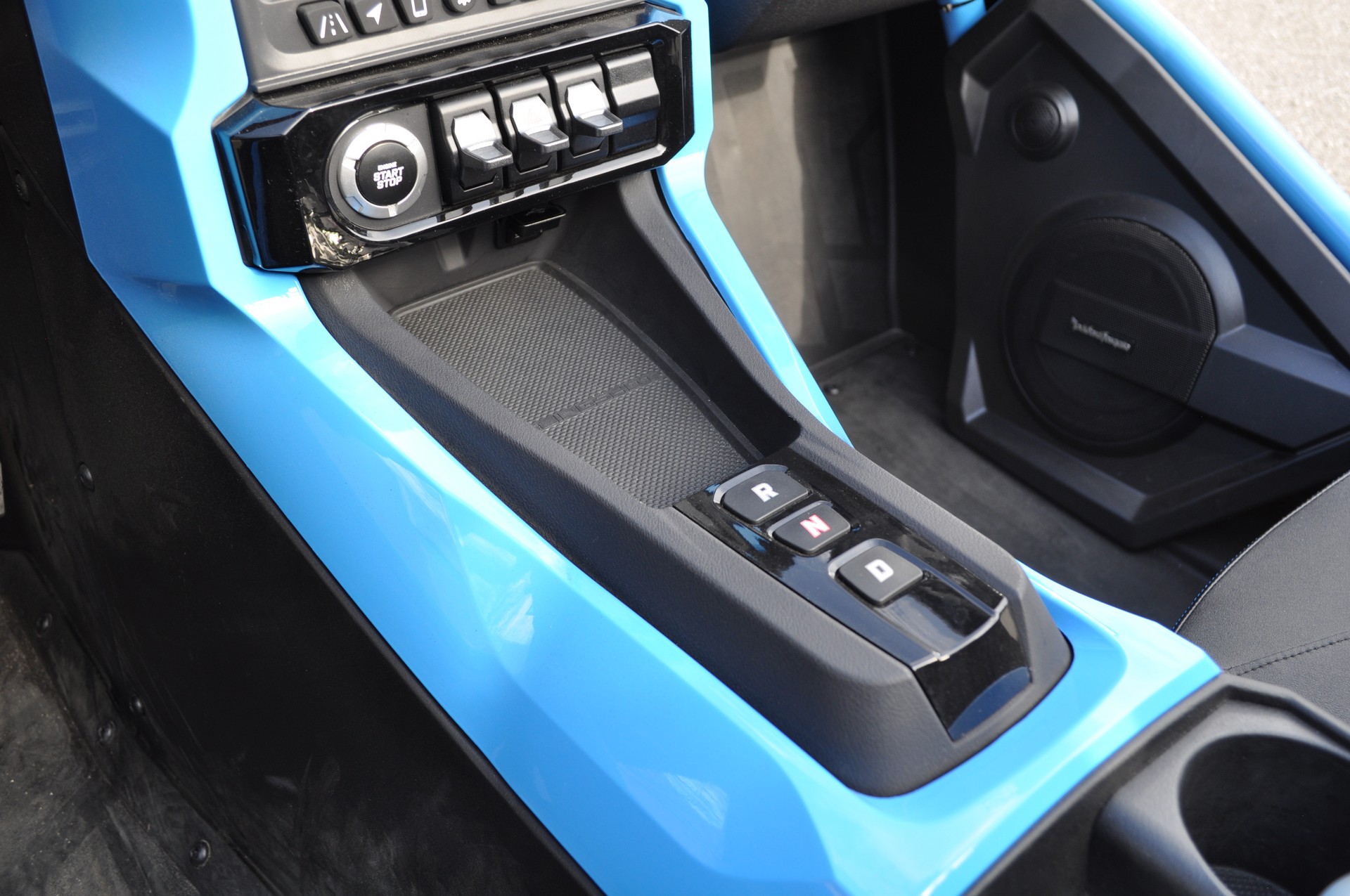 That brings us to the other big update for 2020, a new five-speed automated manual transmission.  It comes standard on the SL and costs an additional $1,700 on the R.

Designed to broaden the Slingshot’s appeal, the AutoDrive gearbox is an exercise in compromise that can be downright maddening at times. The transmission is often slow to shift and there are no paddle shifters to override the gearbox.

This can get annoying at approximately 25 mph (40 km/h) as the gearbox typically stays in second even though you’re begging for it to be in third. This can make a trip around the neighborhood a slightly obnoxious affair.

While the gearbox leaves a lot to be desired, it should be suitable for those who can’t drive stick. Everyone else should go for the manual.

It’s A Blast To Drive 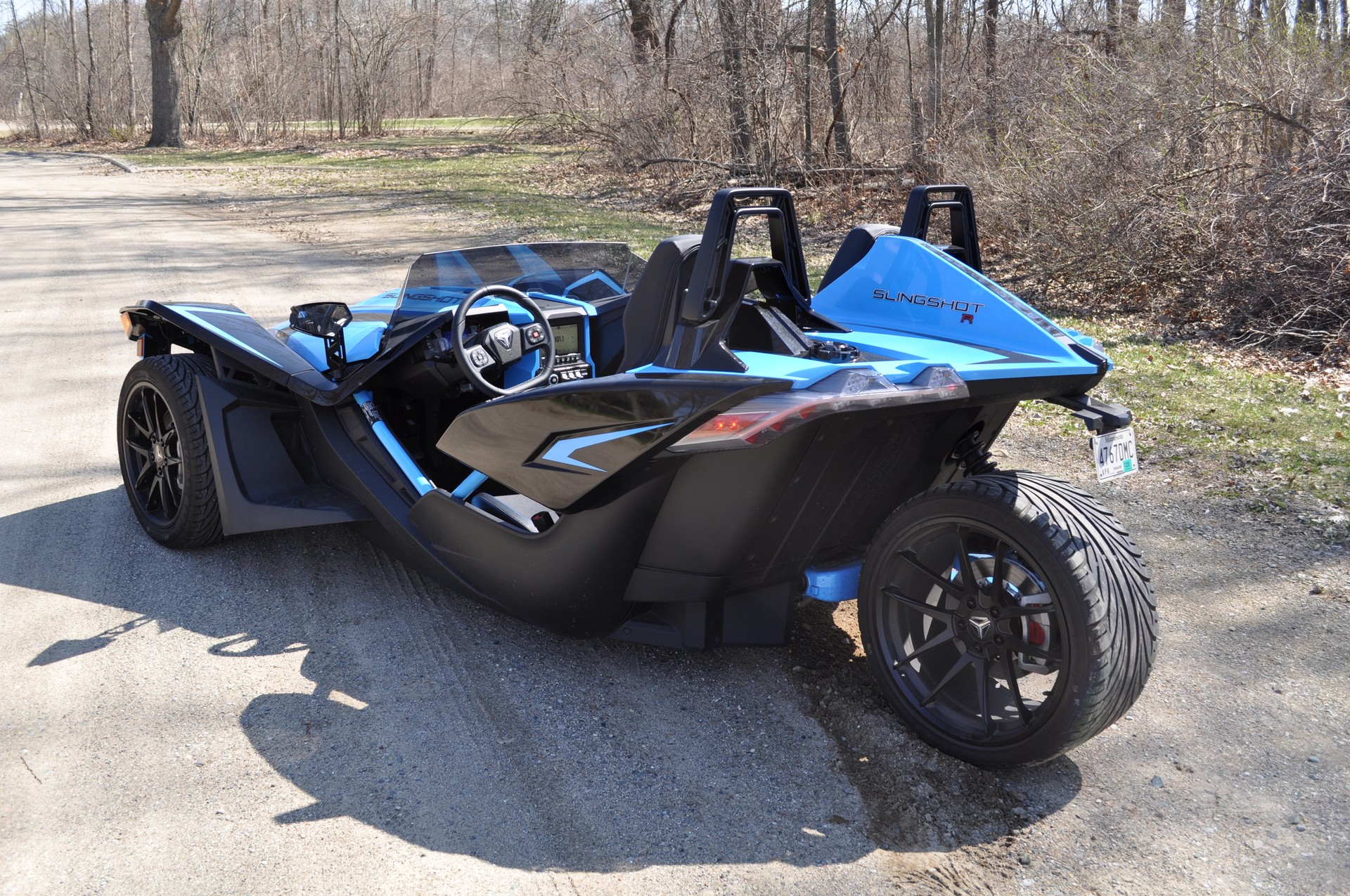 Despite not being fans of the transmission, the Slingshot is mostly a blast to drive as it’s lightweight, low slung and has plenty of power. This makes the three-wheeler an excellent tool for tackling twisty backroads.

Thanks to a low center of gravity and a ride height of just 5.4 inches (137 mm), the Slingshot craves corners and handles great. The model is also pretty stable, although – with only one wheel providing power – traction can be an issue on certain surfaces.

Perhaps one of the most surprising things about the Slingshot is how well it rides. On good roads, which are unfortunately rare in Michigan, the three-wheeler is pretty comfortable. You’ll definitely feel everything, but the Slingshot doesn’t exhibit too much harshness.

On less than perfect roads, things get noticeably rougher. The three-wheel layout also has its quirks as avoiding potholes is more difficult with a center rear wheel.

Of course, the Slingshot has an open cabin and this causes its own set of issues. Wind buffeting isn’t much of an issue at speeds up to 55 mph (89 km/h), but it becomes much more pronounced on the highway and this helps to drown out the radio. While the highway driving experience is tolerable, we definitely wouldn’t want to take a Slingshot on a cross country trip.

Do I Need A Motorcycle License?

The Slingshot is part car and part motorcycle, but it’s technically an autocycle. Rules governing them vary by state but, in the Lower 48, only Massachusetts and New York require drivers to have a motorcycle endorsement.

The rules on helmets also vary by state and helmet usage is one of the Slingshot’s downsides. Roadsters are all about enjoying an open air experience and putting on a helmet kind of defeats the point. That being said, the windshield is more of a wind deflector and, without a helmet, I would have taken a few bugs to the face at 70 mph (113 km/h). 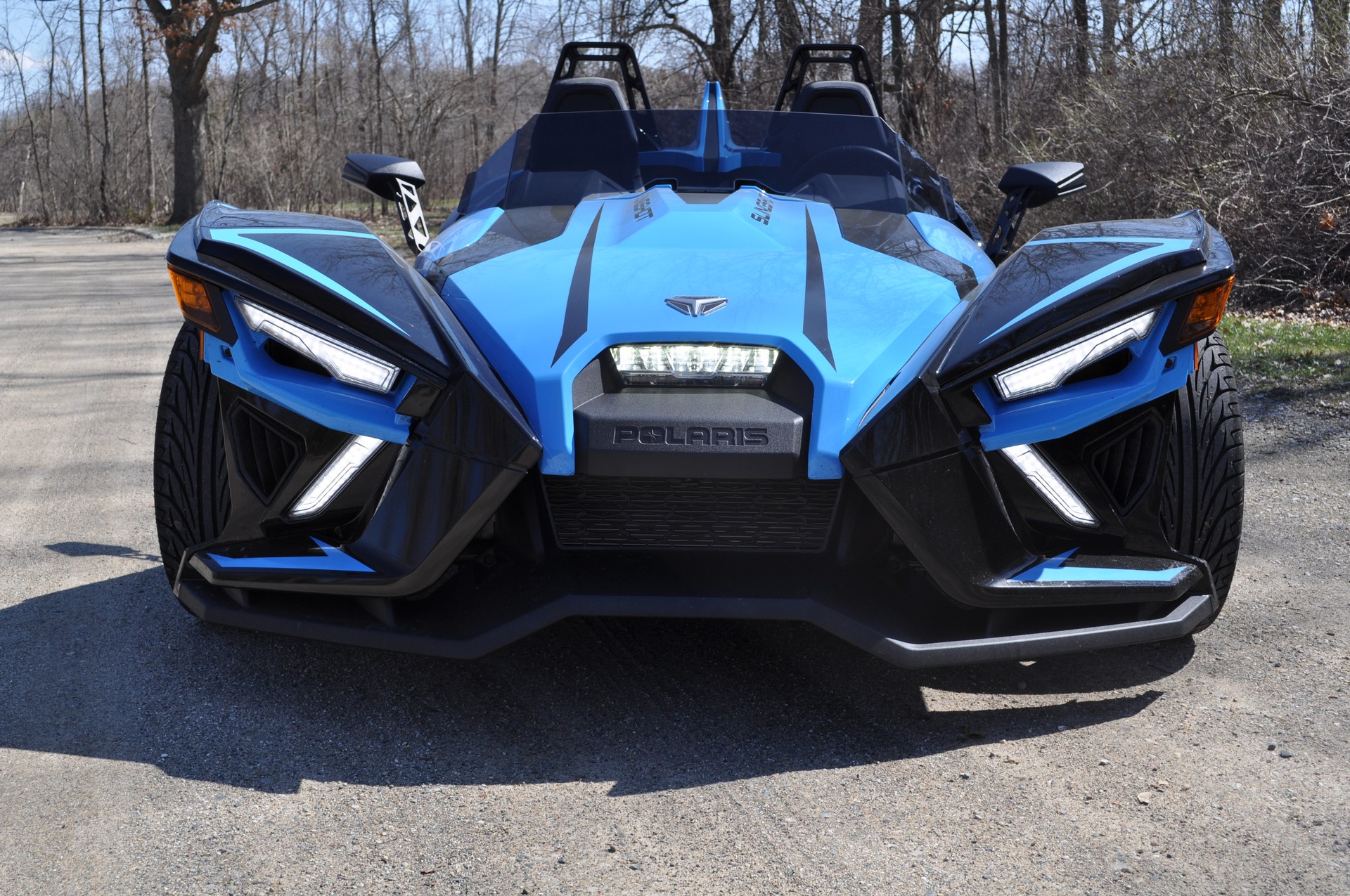 The Slingshot is hard to define as it’s a segment bender with plenty of quirks. Of course, those quirks are a big part of what makes the model appealing as it generates plenty of attention and is like nothing else on the road.

Besides its unique design, the Slingshot is fun, fast and rewarding. It’s also relatively affordable as pricing starts at $26,499 and climbs to $30,999 for R variant.

While the model isn’t for everyone, the 2020 Slingshot is more appealing than its predecessor.  If you’re in the market for a fun toy, we just suggest you stick with the manual.